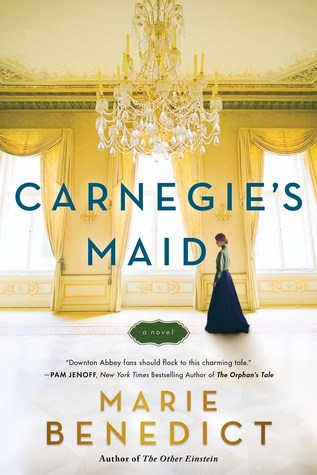 From the author of The Other Einstein comes the mesmerizing story of love, power, and the woman who inspired an American dynasty

In the industrial 1860s at the dawn of the Carnegie empire, Irish immigrant Clara Kelly finds herself in desperate circumstances. Looking for a way out, she seeks employment as a lady’s maid in the home of the prominent businessman Andrew Carnegie. Soon, the bond between Clara and her employer deepens into love. But when Clara goes missing, Carnegie’s search for her unearths secrets and revelations that lay the foundation for his lasting legacy. With captivating insight and stunning heart, Carnegie’s Maid tells the story of one lost woman who may have spurred Andrew Carnegie’s transformation from ruthless industrialist into the world’s first true philanthropist.

A vey romantic ‘what if’ strategically placed in history.

You can’t rewrite the history but you can fill in the gaps. You can add details, stories, suppositions. For instance, you can write a whole novel about reasons why Andrew Carnegie got married so late in life or why he did so much philantropy…

It just may be becauase of one beautiful, smart and determined lady’s made

Carnegie’s Maid is a story of such a supposition. Moreover, it is a story of a strong woman born in a wrong place at a wrong time. And like many other strong women, her journey is a lonely one.

The narration is very good. It is like a conversation or a monologue in places. There are some spots that sound hard to believe (where factory workers speak very posh English), but otherwise, the book is good, very good.

Carnegie’s Maid is a picture of industiral America in late nineteenth century with all it’s grandeur and all it’s smoke, soot and grime. It is a story of people coming to a new and foreign country and making it their own.

All in all, this is a very interesting read. This story just might have happened…